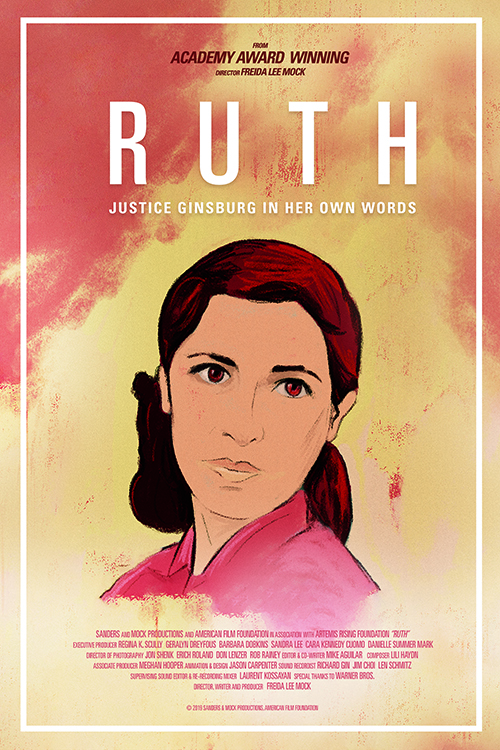 RUTH – Justice Ginsburg in Her Own Words

How does a person with three strikes against her rise to the highest court in the land, the U.S. Supreme Court? The film tells the improbable story of how Ruth Bader Ginsburg, who couldn’t get a job despite graduating first in her law school class in a tie and making Law Review at Harvard and Columbia Law Schools, became an Associate Justice of the Supreme Court. It also reveals both the public and private sides of a resilient, resourceful woman who has survived the hostility of the profoundly male universe of government and law to become a revered Justice and icon for gender equality and women’s rights.

How did Ginsburg’s work as a litigator for the ACLU’s Women’s Rights Project; as a professor; and as an appellate judge make a difference? Most importantly how did her trailblazing work in the l970’s arguing landmark gender discrimination cases before the Supreme Court become a turning point for her and the everyday lives of men and women? And how does Justice Ginsburg’s pioneering work on behalf of gender equality continue to resonate through her opinions and work in her 27 years on the Supreme Court?

With these questions at the heart of RUTH, the film dramatizes a confluence of factors – personal, psychological, social and political that impacted the course of her work and life. The film is designed as an immersive experience through the direct words of Ruth Bader Ginsburg as a professor, advocate, Judge and Justice from the 1970’s onwards; through the use of evocative animation and intimate illustrations to visualize complex constitutional cases; by the insights of colleagues who have directly worked with or have been impacted by her forty years as a legal icon; and by using a rich original score by a Grammy winning composer.