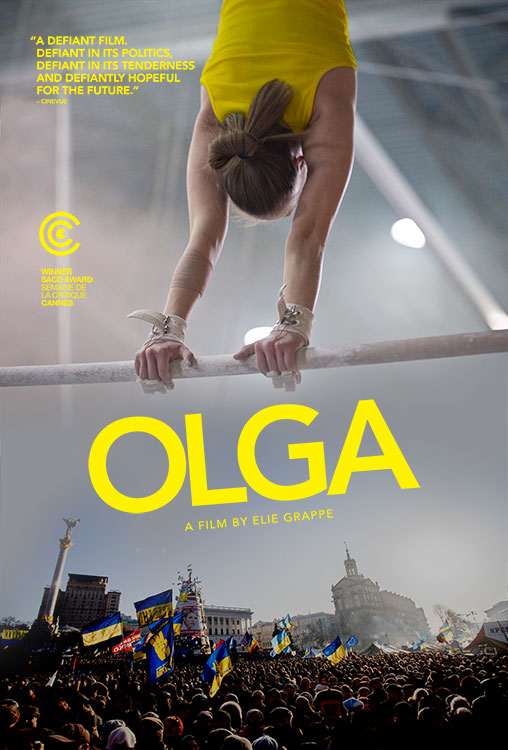 A talented young gymnast from Kyiv, played by real-life former Ukrainian national team member Anastasiia Budiashkina, moves to Switzerland to pursue her Olympic dreams in Elie Grappe’s award-winning drama. Set in 2014, the film follows 15-year-old Olga as she tries to make friends on her new team and adjust to life in her new home. As she relentlessly trains in preparation for the European Championships, her friends and family back in the Ukraine are taking to the streets in what would become known as the Maidan Revolution. Olga is left a powerless, distant bystander as her mother, an investigative journalist, faces danger and violence in her work challenging the brutal Yanukovich regime. The historic events depicted in the film are intricately linked with the subsequent Russian invasion, providing rich insight into the current situation in the Ukraine, yet Grappe’s camera never strays from the point of view of a remarkable young woman struggling to find her way in the world. Can Olga reconcile her personal goals as a gymnast with the living history unfolding in her homeland? This tense yet delicate portrait of exile, ambition, and identity won the SACD Prize at Cannes Critics Week and features a star-making turn from its fearless lead.

“This quietly poignant film… about a tough but vulnerable young Ukrainian gymnast in exile… [is] a heartbreaking reminder of the cost in individual lives and dreams.”

“A timely story of a Ukrainian gymnast torn between her homeland and her ambition.”

“A compelling psychological portrait… paints indelible images of physically powerful, mentally vulnerable young women who want to step up to the podium at all costs.”

“Olga captures, with an excellent sense of atmosphere, the paradoxes of adolescents perfecting a total control over their emotions even as they are boiling inside them.”

“Speaks to the new agony of banishment now being felt by millions of Ukrainians.”