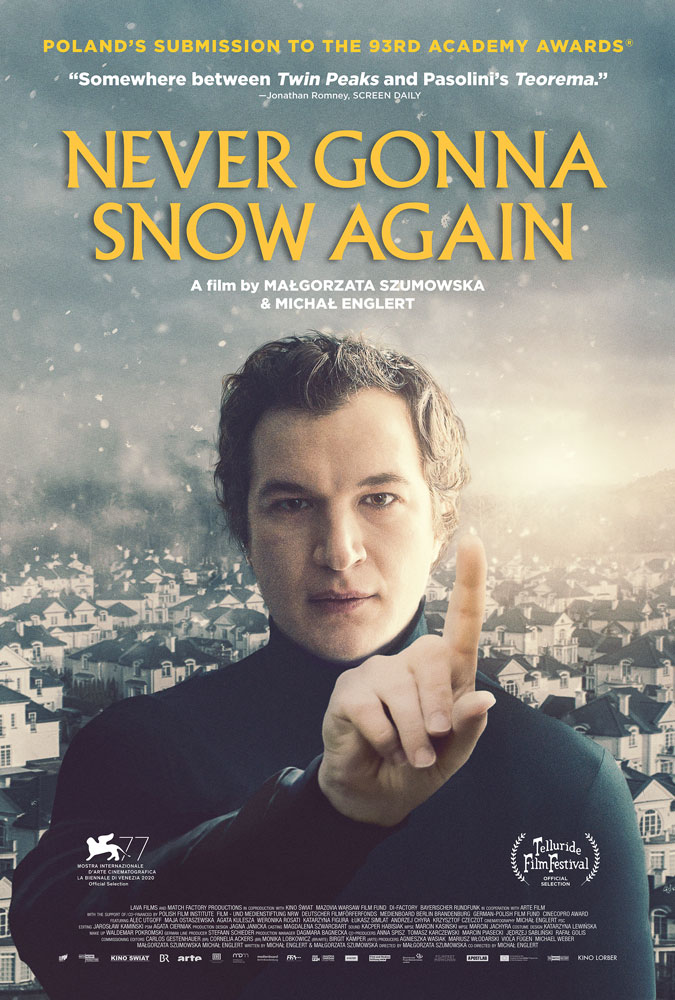 On a gray, foggy morning outside a large Polish city, a masseur from the East named Zhenia (Alec Utgoff, Stranger Things) enters the lives of the wealthy residents of a gated community. With his hypnotic presence and quasi-magical abilities, he is able to get a residence permit and starts plying his trade. The well-to-do residents in their cookie-cutter suburban homes seemingly have it all, but they all suffer from an inner sadness, some unexplained longing. The attractive and mysterious newcomer's hands heal, and Zhenia’s eyes seem to penetrate their souls. To them, his Russian accent sounds like a song from the past, a memory of simpler times. The latest from writer/director Malgorzata Szumowska (Elles, In the Name of) and her longtime collaborator Michal Englert is an unclassifiable meditation on class, immigration, and global warming shot through with Lynchian touches of the otherworldly and moments of sober beauty and unexpected humor.

“[Alec] Utgoff is irresistibly compelling, instilling in his character a silent yet singular presence.”

"Dreamlike and unnerving. A hypnotic viewing experience that awakens all senses through our eyes."

“The way in which Szumowska remixes the divine and the existential also recalls the moral fables of Krzysztof Kieslowski, particularly his soul-searching series Decalogue.”

“A modern fairy tale for a cynical world… full to the brim with arresting compositions.”

"A gently mysterious, darkly poetic tonic of the sacred and profane."